Parker Montgomery ,Head Coach Post 34 Senior Team
Post 34 is proud to welcome Coach Parker Montgomery back for his second season as Head Coach. Coach Montgomery holds a degree degree in Business Management from the University of Alabama. Coach Montgomery was a standout amateur baseball player. He was a member of the World Champion Dizzy Dean 12U Kentuck team then later earning All County recognition as a middle infielder at Tuscaloosa Co High. Parker attended the University of Alabama earning his degree in kinesiology in 2019.Coach Montgomery has coached youth teams at all levels , working with players from entry level to assisting with his High School alma mater Tuscaloosa County High and currently head coach at Sipsey Valley Middle School . Coach Tyra is well connected within the Alabama college network and looks forward to bringing his first hand experience to help build both better baseball players and more importantly, better men.

​Assistant Varsity
​
​​Jack Smalley, Head Coach 15U Team
Coach Smalley returns for his tenth season leading our 15U team. With over 28 years of youth baseball coaching and umpiring experience, Jack is the "Veteran" coach in the Post 34 organization. Coach Smalley's History with Post 34 baseball runs back to the 1940's when his Father played on the Post 34 State Championship team. Coach Smalley has coached youth teams to numerous championships with the 2106,2018  and the 2019 JV teams winning the Alabama 15U state championship, and has over 380 wins in his career. A graduate of the University of Alabama, Coach Smalley played football for the legendary Coach Paul Bryant.

Conrad Smalley, Assistant Coach 15U
Post 34 welcomes second year Coach Conrad Smalley as assistant coach of Post 34 15U. Conrad was a successful three sport athlete at Tuscaloosa Academy lettering 6 years in both football, cross country and baseball. He played for Post 34 for the 15U, HSE, and Senior teams and was a standout on all 3 teams as a catcher, outfielder and pitcher. Conrad is a Religious Studies  major finishing his senior year at Sewanee University with an interest in marine biology.


Captain Brian Butler, USN, Post 34 Athletic Officer
Captain Butler entered military service in the United States Navy in 1991 as a Seaman Recruit. He received his commission in 1998 and has since served in the Defense Contingency Support Team, Mobile Inshore Undersea Warfare Unit, Carrier Strike Group TWO, and the Forth Navy Expeditionary Logistics Regiment along with several other units.
Captain Butler is still an active reservist and has served two extended deployments in the Middle East in support of Operation Enduring Freedom and Iraqi Freedom 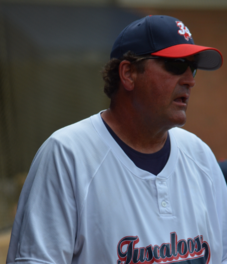 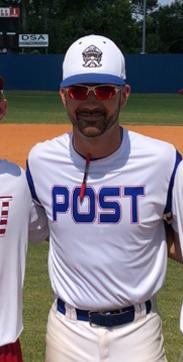 Post 34 welcomes Head coach of the varsity Post 34 team. Matt is 24 years old and from Tuscaloosa. Coach Langston lettered  all 4 years of high school baseball and  graduated from Northridge High School in 2014. he is  now currently enrolled at the University of Alabama finishing up his final semester in Math Education this fall.  Matt played 2 years of American Legion baseball with Post 34 in 2012 and 2013. In those 2 years the teams managed to finish in the top 3 in the state both years.Coach Langston on his philosophy, " American Legion baseball is really a great experience because you get to play with guys from other schools and make strong bonds with others and I look forward to the opportunity to work with these guys and having a successful season this summer." 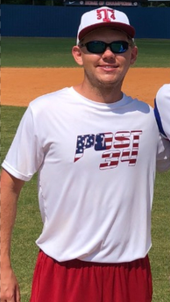